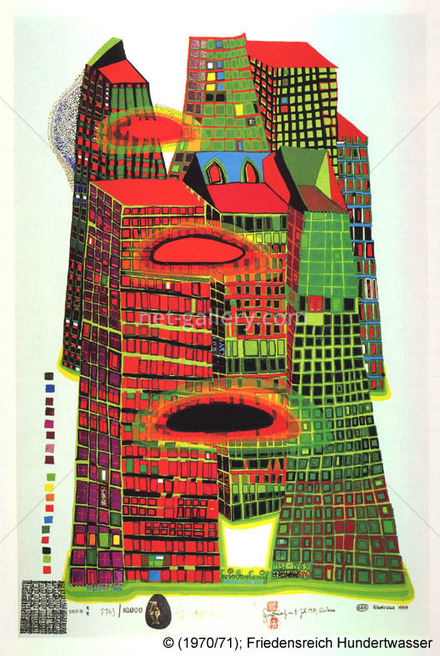 To put an idea into action is underlying this intense work of the year 1969. For Hundertwasser it was about the picture becoming the conviction – already painted in 1952 in Vienna – that even tower blocks of a city can become "human dignity" by the windowright, by colourful painting and free designing, to be able to distribute this to as many people as possible: "When man is leaving the ground, he can make it up for his own creation."
Hundertwasser's wish to distribute such a motto, to achieve signal effects for many and to approach a lot of people through a huge edition of the graphics, to what he was encouraged by the technique of the silkcut, which allows editions of absolute equal quality. This fact made him pick the price of DM 100.- each, so the graphic was affordable for all people.
The printer Lino Coin of the Studio Quattro took this task which almost needed two years, and treaties with Dorothea Leonhart, the galerist of Munich, who had ordered this piece, settled the economic part. Technically the greatest variants were produced – a special system let 40 colourversions with 200 prints come into being -, but the cooperation between the three of the contractpartners attracted a lot of opposites leading to judicial disputes. Hundertwasser turned to the publishing company Ars Viva in Zürich and started the overworking of the remaining edition in ten versions with phosphoric colours and metalstamps. To create "beautiful skyscrapers" had established.
In San Francisco for example the instruction was given to ornament all tower blocks. The big distribution of this piece caused extraordinary effects, that is why Hundertwasser is not wrong by saying: "I regard this to be a very meaning work of graphics."

On the graphics of Friedensreich HUNDERTWASSER you can find several signs and descriptions. By way of example we have chosen the silkscreen "Good Morning City - Bleeding Town":

The artist signs his works in writing with ink in flowing hand, in Latin or in block letters, in uniform or combined way: 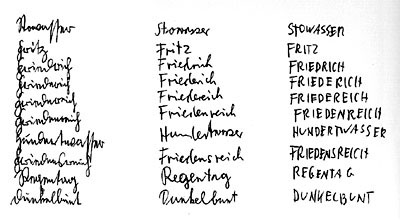 We show you silkcuts, woodcuts and etchings as well as watches, silkscarfs, posters and artprints designed by the artist.

Situated in the artist's native town we feel a close synergy with his work, thus enabling us to provide competent advice to our customers. This has resulted from close contact with the artist and his opus for a long time, allowing us to secure the optimum pricing structure.

We have extensive connections with collectors, galleries, exhibitions and museums, allowing us to successfully trace and procure long lost graphic arts, rarities and originals.

For decades we have been selling contemporary art to a broad spectrum of international art lovers; we use a network of wold-wide contacts. You want to purchase Good Morning City HWG41 created by Friedensreich Hundertwasser?